A Tale of Two Projects/One Event: His Holiness the Dalai Lama at Santa Clara University When I received the call from Jay Colombatto, a client we have collaborated with for two decades, I excitedly accessed my calendar to check our availability. Jay, currently in the Office of Marketing and Communications at Santa Clara University, was in the process of making a connection for a colleague—connecting us to the MarCom person assigned to the Dalai Lama’s visit to the University for an historic dialogue on business, ethics, and compassion. Our contact, Margaret Avritt, explained SCU’s goal: For Tam Communications to produce four behind the scenes videos that would be distributed, along with video of the event itself, on a memory stick as a memento to those that attended.

While Jay and I chatted, I nervously clicked forward to my February 2014 calendar (it was, after all, the Dalai Lama), only to see what I feared. Tam and I were already booked on February 25th for another key account. It was only a moment of disappointment because it just meant that the rest of my team would fill the roles that typically Tam and I filled. Producer, Regan Eymann, would manage the day and be a field producer with one production unit. A second unit would be lead by Timothy O’Connor Fraser who was not only an SCU graduate but also a Buddhist and an experienced video producer. Three for three. ☺

Kudos to the Event Planning Team

I stayed involved in pre-production as Account Manager and Writer, while Regan took on the bulk of the logistics. Pre-production meetings were amazing. In a room over-looking the Broncos’ basketball court, there would be 30 to 40 people, each with an important role. In addition to the University staff, the team included Dr. James Doty from Stanford, the co-sponsor of the event, representatives from Santa Clara PD, Dignity Health (their CEO, Lloyd Dean, was a keynote speaker), Kirk O. Hanson, Executive Director of the Markkula Center for Applied Ethics, and, oh yea, the Secret Service and the State Department. Pulling off this event in the time they were given to accomplish it required all hands on deck and it showed. I was proud to be part of the team even if our part was small.

We would go into production with a semi-defined idea of what we were after. The University would deliver to attendees full versions of both the morning and afternoon events along with a series of four behind-the-scenes videos that we would create. Of the four, two were clear—one that told the story of the “Excitement of the Day” (our working title) and one on Interfaith Dialogue. We created a shot list and I developed a list of questions that would tell those stories and also give us more great sound bites for two “yet-to-be-defined” videos related to the conference theme: Business, Ethics, and Compassion.

Read about the production challenges in Regan’s blog post.

For me, other than the disappointment of not being out on such an exciting production, I was, as I had expected, excited that despite many challenges, my team did a great job. My first exposure to the project after returning from Vancouver would be in the form of interview and live event transcripts. I poured over them while Tam got his first look at the footage. Needless to say, he was pleased with what was shot. The only disappointment was that the live event coverage, not handled by us, was captured in standard definition not high definition. We would have to upconvert.

Reading the transcripts, was a life-affirming experience. It gave me hope that there are more businesses and business leaders who truly believe that supporting a positive work/life balance and being compassionate towards their employees is simply good business. And those were the transcripts not just of the Dalai Lama but also from the speakers at both the morning and afternoon events and impromptu, man-on-the-street interviews with attendees. I was and remain inspired.

A Creative Assembly Line in Action 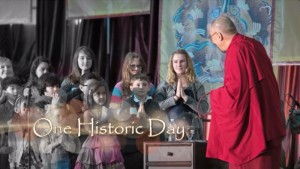 With about thirty days to deliver the final programs, we began with the video that was the easiest to post, the one capturing the excitement of the day. Tam would start by building a music video open of the pre-dawn and crowd gathering b-roll. With Regan’s guidance (she had conducted most of the interviews), I picked sound bites and started weaving together our first deliverable.

When we had all four videos in the review/comment/change/approve cycle, we stepped back and looked at a graphics package that would provide the perfect finishing touch. This is the cue to engage our long-time Art Director, former Tam staffer now owner of Makai Design, Mike Baxter. We sent Mike several elements—print pieces, web pages (one of the places where the videos would reside), still photos from famed photographer Michael Collopy as well as Santa Clara University’s own photographer, Chuck Barry; and branding guidelines along with links to the videos in progress and our own ideas for effects. With a little fine-tuning and again more creative iteration, the result was, in my opinion, spectacular.

As videos were completed, they were encoded for optimum playback and sent off to Santa Clara for upload to their website and memory sticks.

So what was that about a second project? 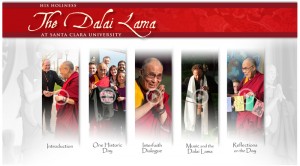 About a week before delivery, we received a call from our client. The team realized that it would be really nice to have an interface/menu to access the videos. And it would be really, really nice if part of that interface included a welcome from Father Engh, President of Santa Clara University. We agreed and presented options we felt we could get done by the deadline. One (developing in Flash) would have a slightly more seamless and elegant presentation but was not iOS friendly. The other would play within a browser window but was iOS friendly. Considering the likelihood that a presentation delivered on an external drive would end up on an Apple device was pretty slim, they opted for the former and we re-engaged Timothy and his company, Dewdrop Media, to put his flash skills to work. Meanwhile our production team, headed to the University to capture Father Engh’s welcome on video. A week later we presented our client with a flash deliverable. Sweet—two projects, one event.