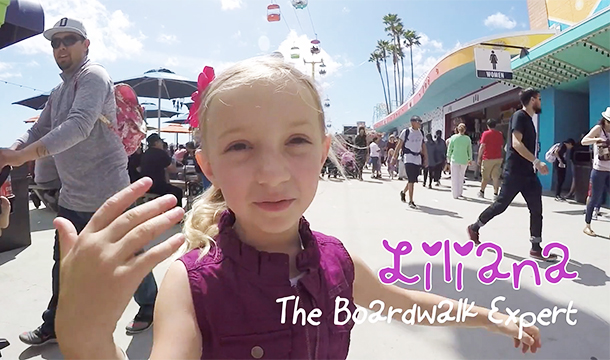 2016 was the year of the social media video for the Santa Cruz Beach Boardwalk. We created dozens of videos from simple POVs to behind the scenes of special events but our favorite of all was the series, Liliana: The Boardwalk Expert hosted by Santa Cruz local Liliana Eymann. If the name is familiar, that’s because Lily is the daughter of Tam Producer/Director, Regan Eymann and granddaughter to company co-founders, Tam and Susan O’Connor Fraser. In other words, she had the role in the bag.

When asked about the project, Regan had this to say, “You know the moment when you already totally love your job and what you’re doing and then you find out you are going to get to work on a project involving your daughter…yea, that happened and it’s awesome!”

Production of the 13-episode series took place through the summer and into the fall. As far as the script, most of it is written on the spot by our six-year-old star. She provides her from-the-heart commentary on her experience riding a ride, eating her favorite churro, or playing games in the Boardwalk’s Casino arcade, adding in her big personality.

“Even though we pitched the idea to the Boardwalk and they loved it, we were still a little anxious about whether she could pull it off,” notes Creative Director/Executive Producer & Grandma, Susan. “Working with children on the set always presents challenges and Lily can get shy but she nailed it episode after episode.”

“I can’t pick my favorite,” says Director/Editor & Grandpa Tam. “I love it all.”

“This summer, Tam began producing a series for us called “The Boardwalk Expert,” featuring unscripted reviews of our rides, food and games from a child’s point of view,” added Sondra Woods, the Boardwalk’s Advertising Director at the Boardwalk. “By the end of the summer, this series reached almost 1.2 million views on our social media channels. This was a great way to entertain our fans, and Tam produced these short videos with so much pure authenticity, it really touched our fans’ hearts. As a result, we decided to continue these short films through our off-season, highlighting our year-round attractions, and again, Tam really came through, producing four more engaging and sweet videos, reaching another 25K fans. Our guests not only like these videos, but comments and shares show that they “love” these videos.”

Look for more Liliana videos in 2017. Who knows what she’ll have to say as she takes on new adventures.