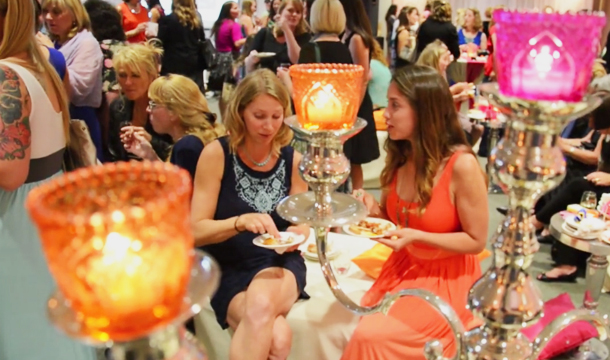 This Mama Needs a Night Out

And that’s just what I got, well I was working, but it was still a night out with amazing women and stories that made me laugh, cry and feel inspired.

When Mimi Desmond, a great friend and colleague, contacted me asking if Tam Communications wanted to be involved with Mamas Night Out, I was excited. It was an event I had heard about for years, even though I had never been able to attend. I just knew it was something we would want to be involved in.

One challenge was I had been pushing to keep our non-profit efforts focused on one organization at a time so we were not over-extended. We were already way beyond our “limit” with commitments to the Santa Cruz Derby Girls, Event Santa Cruz and the City of Santa Cruz 100 Year Anniversary of the Wharf. So how was I going to convince Tam and Susan to take on one more project when I was the one trying to set limits? Well, I must have made a very convincing argument (or they’re pushovers) because we were on board.

I worked closely with Michelle Riddle, co-founder of Mamas Night Out, to understand the event and the goal of the video. Michelle told me, “I think until you come to Mamas Night Out, you have no idea of what the event is really about. I was so happy when I met you and you volunteered Tam Communications time and resources to cover the event.”

After that first meeting, we were all in, fully committed. How could we not be? Mamas Night Out provides women, mostly mothers, a night out with friends where they can dance and socialize and, in the process, learn about and raise money for pediatric cancer.

In addition to these take-aways, the event is also an opportunity to show love and support to the Warrior Mamas—those with children diagnosed with cancer and those that have lost their children to cancer. And although tears were shed throughout the speeches, it was also a time to reflect, to be thankful for what you have in life, and to find a way to be the change, however you can.

As an organization, Mamas Night Out is being that change. They raised $60,000 that night and over $150,000 over the last four years––an awesome accomplishment. We’re exceedingly proud to be a sponsor, creating a video to reach more potential sponsors and more women, to make next year’s event even bigger.

Michelle added, “You and Tam really got what the event was about, and through this video, captured so perfectly what makes Mamas Night Out such a special evening.”

Thanks Michelle! We enjoyed producing the video as much as you enjoyed watching it. Take a look and see for yourself the tremendous efforts that Mamas Night Out is doing for our community and pediatric cancer.