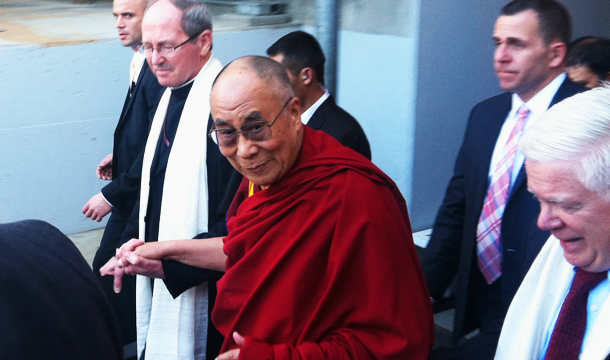 His Holiness the Dalai Lama at Santa Clara University: My Most Important Project Ever? Well, at least so far.

Hands down this was the most important project I have ever been involved in and only the future will tell whether anything will top it. Susan and Tam would be on-location in Vancouver on another project so the responsibility for logistics and production was mine. A big responsibility I was ready to take on. 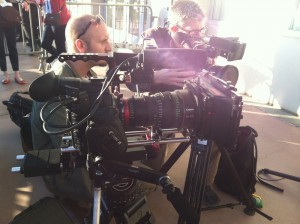 Our role for the day was to capture the excitement around the event and to interview key people. So my first task – put together my production teams. We weren’t responsible for documenting the actual events, thank goodness; instead we wanted two lean and mean production teams. They would include a field producer, director of photography, and a sound person. Each team would also have a production assistant, provided by the University.

The teams consisted of Tim O’Connor Fraser and myself as field producers, Jeff Regan of Shooting Star Video and Scott Bayer of Creative Media behind the camera, and Andy Snyder and Stephen Thorpe on sound. With all the hype and down to the minute schedule, it became a lesson in patience and adaptability. You have to go with the flow when dealing with His Holiness.

Five big challenges presented themselves and we tackled each one with grace and professionalism.

As a Head of State, the Dalai Lama has a large entourage of State Department Officers that travel with him to protect him. There were entire areas blocked off that only certain people with the right credentials could enter. Our entire crew had to go through background checks to be cleared for that kind of access. On the day of production all of our gear had to be checked by bomb dogs and any time we entered the “green zone”, we had to be wanded. But this access had its perks, as we were given proximity to His Holiness most others could only dream of. We hit our biggest hurdle first thing in the morning, the security sweep of the building took about an hour longer than anticipated, so we were immediately off-schedule by an hour. Not how you want to start the day, but we made up the time and got ourselves back on-track.

A schedule planned down to every minute, that’s the life he leads but what I love is he still lives by his own clock and ultimately dictates if he’s going to stick to the schedule. When we were in our planning meeting prior to the event it went something like this, “Here’s the schedule from the State Department of when and where he will be at all times but he’s going to do what he wants and we will just have to adapt.” And that statement was realized from the get-go when his arrival was delayed by 45 minutes. This was the second schedule impact, which almost blew our third shot. The shot that became referred to as Susan’s “Beyonce” shot of His Holiness traveling from one building to the next with his entire entourage surrounding him. I’m used to running one team, be it a small team of just Tam and I or a large cast and crew for a Santa Cruz Beach Boardwalk commercial but I’ve never run two teams at once. Even with the second team in the capable hands of my big brother ☺, I still found myself running back and forth and communicating between the two teams to make sure that everything was running as smoothly as possible and getting the shots needed.

In the end, the day was a huge success due to the professionalism of the entire crew and our ability to make quick decisions and act on the fly.

Because of the green zone and only certain people being allowed in those areas while the Dalai Lama was on property, we were extremely limited to where we could conduct interviews. We also had a large list of people we wanted to interview on the “street” at the reception following the event, of course, a majority of those people didn’t attend the reception and we had to quickly grab as many people as we could to make sure that we could fill the need for the videos. Another adaptability lesson.

Typically, we go into production with a clear idea of what the end product will be. On this project, two of them were planned from the outset One Historic Day and Interfaith Dialogue. The other two Reflections of the Day and Music and the Dalai Lama were born in post. And although all of the videos are amazing, the two that came after the event are two of my favorites as they were inspired from the day, a true act of inspiration, adaptability and once again going with the flow. A day of putting my skills to the test, it wasn’t all about learning or working, despite the craziness of the day, there were amazing moments of enlightenment and fun. Two particular moments stand out to this day. The first occurred when His Holiness arrived and stepped out of his vehicle, there was a palpable moment of peace that swept over all of us. You could feel it inside your heart. It was very touching. The second was when we were sitting at lunch talking about how everything was going with the team from Santa Clara. There was question if the Dalai Lama was going to attend the VIP luncheon; he of course did, which was not on his schedule. But just prior to lunch someone asked him what he wanted to eat and he said, “Prime Rib.” So everyone was scrambling at the last minute to satisfy his request. Tim, a Zen Buddhist himself, turns to the person telling the story and says, “He’s not a vegetarian?” And the response was, “Nope, definitely not.”

Even that story is somewhat thematic of what they say about best-laid plans, it doesn’t always go according to plan (the Dalai Lama wanting Prime Rib at the last minute). And in the case of this project it couldn’t have been truer. But that’s what made the project that much more exciting, challenging and ultimately fulfilling as a producer. When you can tackle a problem, or in this case, a multitude of problems, bring everything together and as Tim Gunn would say, “make it work,” you feel like you’ve truly done your job. And to be a part of Santa Clara University’s history like this and have made that impact…well there really are no words for that.