Some members of TeamTam made a big impact in a short time, and Nicholas Laschkewitsch was definitely one of them. His enthusiasm and bright outlook made him an absolute joy to work with. We’re honored to be his first job right out of college – he was the only team member hired after hearing him spontaneously break into song. He’ll tell you the story. We were sorry to see him leave, but losing him to an internship with Disney Imagineering somehow made it a bit easier for us because he was so excited. Thank you, Nicholas for sharing your story with us!

I started with #TeamTam back in May 2017 and was on the team for 1 year, leaving the company in May 2018. As a life-long theme park and roller coaster fanatic, I’ve actually known of TamCom’s existence for quite some time. Story time! The Santa Cruz Beach Boardwalk is not only my favorite amusement park, but my favorite place in the world. I grew up going there, and I am totally in love with the sense of nostalgia I get when I visit. Nothing beats a ride on the Giant Dipper on a warm summer night. As a major Boardwalk fan, I, of course, purchased all sorts of merchandise with park branding on it. Let’s get to the important parts, though – jump to 2007, the year of the Boardwalk’s Centennial Celebration, and the release of the Millions of Memories DVD, produced by TamCom. I cannot begin to tell you how many dozens of times I have seen that DVD, and it’s one of the first things I show people who haven’t heard of, or been to, the Boardwalk. Of note, there is a selection of bonus features on the DVD, one of which was a collection of Boardwalk television commercials from over the years. I watched the DVD enough to memorize most of the jingles, especially the lyrics from TamCom’s 1992 spec-spot for the Boardwalk, “Gotta Be There,” which won over the Boardwalk and made them a client for TamCom (for which they still are to this day!). That jingle was but a small taste of the creative powerhouse that is Susan O’Connor Fraser that I would much later become incredibly familiar with. It was this DVD, though, that inspired me to follow TamCom on the internet, and later social media, where I would frequently interact with their oft-Boardwalk-focused content.

In the spring of 2017, I reached out to TamCom as I was looking for a summer job in video production. At the time, I was studying both Mechanical Engineering and Radio-Television-Film at San Jose State University, and I was looking to gain experience in both of those fields. At an impromptu job interview with Susan and Tam at the Boardwalk during the Park’s annual summer kick-off celebration, I surprised them by reciting the lyrics from the “Gotta Be There!” spec-spot, which emphasized the passion I had not only for the Boardwalk, but also for the high-quality content that TamCom is known for. Before long, I started working for them in Scotts Valley as a Digital Media Specialist, and I couldn’t have been more thrilled.

Before joining TeamTam, I was mostly focused on my studies at San Jose State University. Prior to the summer of 2017, I was fairly reluctant to give up my summers away from school to take a job. However, when that specific summer was quickly approaching, and I realized it would be my last “free” summer before graduation, I quickly decided that I needed to spend that summer more effectively. As such, I jumped into action and figured out the best way to manage getting experiences that would pertain to both my engineering and filmmaking interests. In addition to joining TeamTam that summer, I also worked at California’s Great America in Santa Clara as a Ride Mechanic. I was working 7 days a week between these two jobs for over 60 days, before school started up again and limited my hours a bit – thank goodness it did! As far as my experience with video production prior to joining Tam, I had received most of that through my volunteering with the American Coaster Enthusiasts, or ACE. ACE, a non-profit, is a worldwide roller coaster enthusiast group with over 6,000 members that is dedicated to the preservation of all roller coasters. From 2013 to 2015, I produced a web-series called “The Lost Parks of Northern California” and produced a feature-length documentary, “The Legacy of Arrow Development” in 2016. These passion projects for ACE prepared me well for working at a full-fledged production company such as TamCom. Even though my primary focus today is my career in Mechanical Engineering, I will never stop working on these documentaries – in fact, I’ve got at least two in development right now, and my time at Tam has only strengthened my passion for video production.

What were your roles with Tam?

While my title of Digital Media Specialist mostly entailed my managing of TamCom’s social media channels, that was but a sliver of my many duties. In any shoot where I was available, I came along as a production assistant, where I helped haul, and setup, equipment, snap behind-the-scenes photos, and share little blips throughout the day on social media. At the office, I spent many hours logging terabytes of video footage from all sorts of cameras so that Tam could easily locate the footage and best shots he needed when going through the editing process. While this task was often tedious, I enjoyed it quite a bit as it allowed me to watch every single video clip taken in a shoot. Believe me, I loved logging footage from anything we did at the Boardwalk!

It is incredibly difficult to pick out the most memorable moments with Tam as I loved every shoot we did, regardless of the client, especially when I made cameo appearances in them. However, there are a couple of moments I’d like to specifically point out, starting with shooting the Free Friday Night Bands on the Beach for the Boardwalk. While I am not a major music nut, I have always enjoyed attending the free concerts at the Boardwalk, with Eddie Money, Papa Doo Run Run, and Smash Mouth being my regulars. During that summer of 2017, we filmed nearly every concert for a video 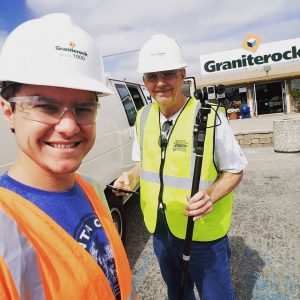 project on why the Boardwalk is such a great venue to hold a concert. This allowed for up-close access to these musicians, whom we often interviewed at some point during their concerts. Being on stage while these musicians were performing whilst taking behind-the-scenes stills was truly special, something I know I will surely never experience again. That summer ended up being the last year for Eddie Money at the Boardwalk. He tragically passed away in 2019, which has since made that particular shoot especially memorable for me.

Another memory of note was when we were filming a piece for Satellite Healthcare in San Jose at a patient’s home. The video was about in-home dialysis and required Tam and I to simultaneously film the patient going through the entire process in her bedroom. I have never been comfortable with the sight of blood, and after nearly 10 minutes of watching the blood pump through the machine, I interrupted the shoot and told Tam I needed to step out. My face was completely white and I almost passed out! It became a pretty funny story later on, but boy, I did not feel good at the time

My favorite project that I got to work on was the production of a nomination video for the IAAPA (International Association of Amusement Parks and Attractions) Spirit Award in 2017. The video that was produced was to nominate the Boardwalk’s Karley Pope, whom I had personally been friends with for over five years. The award itself honors the person that best embodies the spirit of the winning amusement park. What made this my favorite is that the shoots with her at the ‘Walk were essentially done without her knowing what the footage was being used for, even though all of us at Tam, of course, knew. And, better yet, she ended up winning the award, and I was proud to have played a small part in getting my friend the win!

Where did you go professionally after Tam, and what are you doing now?

Shortly after leaving TamCom in May of 2018, I graduated with my Bachelor of Science in Mechanical Engineering from San Jose State University and my Minor in Radio-Television-Film. Whilst working at Tam, I was accepted to an internship with Walt Disney Imagineering as a Ride Mechanical Engineer in Glendale, California, that was to start in June 2018. Since the age of 5, I have had a dream to someday design roller coasters, so when this opportunity came to a head, I had no choice but to accept it. After this 5-month ride (pun intended!), which unfortunately didn’t turn into a full-time job, I accepted a full-time position with LA ProPoint in Sun Valley, just north of Burbank, as a Mechanical Design Engineer. At ProPoint, we specialize in designing rigging systems and specialty mechanical equipment for primarily theme park-based clients. Even though we don’t specifically design ride systems, the fact that I get to design for theme parks every day gets me up in the morning. The goal still, though, is to end up in ride design…someday! One of TamCom’s mantras is “we love what we do, and it shows” and I have taken this exact saying to heart and carry it through everything I do personally and professionally. When you love what you do, it is one of the most fulfilling feelings in the world. The key is to recognize when you aren’t loving what you are doing, and to adjust and course-correct to get the fulfillment that you need and deserve. Of course, another takeaway was that I loved filming at the Boardwalk, but that wasn’t totally unexpected.

I am honored that I was able to work for TamCom in advance of their 40th anniversary, and will forever cherish the memories I made over that amazing year of fun. Specifically, I’d like to say thank you to Tam and Susan for believing in me and giving me a shot at working for them, and to Regan for her spunky support. I miss working for all of you – keep on loving what you do!