We were so happy to sit down with Connie recently and catch up over lunch. She played such an integral role on TeamTam, and we’re thrilled that she sent us her memories, in her own words. We called her “Nails” Segreto because of her tough negotiating skills with the Discovery Channel’s Business Affairs Department. Thank you, Connie!

Sales and Prospects and Development (oh my)

Though I never had the opportunity to work on their signature Santa Cruz Beach Boardwalk account, I had my own “thrill ride” at Tam Communications. 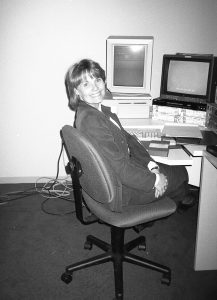 I joined Tam from another Bay Area production company as a sales manager, spending many hours dialing for dollars to help build up a viable prospect list. That was a veritable Giant Dipper ride – from the excitement of connecting with someone who actually answered their phone to feeling like the queen of rejection! I heard everything from “I’m sorry, he passed away,” to “I just got laid off,” to “Please leave your message…” for the umpteenth time.

When we finally did have an opportunity to bid, clients never wanted to let us know their budget. I would finally tell them that giving us a budget range would prevent me from having to bring out smelling salts to revive them from the shock of an estimate. Believe it or not, that generally worked. We were blessed with so many great clients who truly appreciated the incredible creativity and value that Tam, Susan and the whole amazing team brought.

One day, we were all in a team meeting commiserating over the recent economic downturn. Corporate clients were reluctant to invest in any marketing, much less video, and I blurted out, “Let’s focus on television!” Little did I know that I had just launched myself into unknown territory and a brand-new position as Director of Development.

Of course, Tam and Susan developed a Coast Guard TV Series pitch reel overnight. (NOTE FROM SUSAN: It was a little more than overnight but it was fast). I just had to discover who to call, what to say, and how to let them know what set our show and team apart from a host of competitors. I spent untold hours behind closed doors, researching, thinking, praying and, once again, dialing for dollars. One day, someone on the team found an old headshot of mine from my very limited time in commercial acting. They made several copies of my headshot, cut it out and put them on sticks, and about eight people marched past my office window with my headshot in front of their faces. It was hilarious. The only problem – I was actually speaking to a VP of Development at one of the top Hollywood production studios at the time. It took everything in me not to burst out laughing.

After over sixty rejection letters, I was so excited to actually get a call back from a production studio senior executive. He called to personally congratulate me for being the only person to ever get the same project in front of him twice! But no, he still wasn’t interested.

When we eventually engaged with a distributor, it began one of the most thrilling rides of my life. To put it in Boardwalk terms, I went from the Cliff Hanger to the Cyclone to the Fireball with a couple passes through the Haunted Castle – and that was just the negotiation process.

I loved producing Coast Guard TV segments and episodes! The most exciting time was in Miami when the Coast Guard was called to rescue the crew of a freighter that had been taken over by Dominican stowaways. We were on scene for the entire event. Tam captured the intensity as he followed the Coasties up the side of the freighter while the stowaways hurled cargo at them or jumped in the water to escape. I was on the patrol boat keeping tabs on the story and guarding one of the stowaways they had captured and handcuffed. It didn’t take long for the Coasties to free the captain and crew and turn the stowaways over to law enforcement. Some great interviews ensued!

One of the most challenging assignments was creating a full segment from just 30 seconds of Coast Guard footage – generally an empty rescue basket going down and then a person in it coming up. We’d go out and capture b-roll and interview Coast Guard crews and the rescued victims and make it happen.

I remember one unique airlift in particular. The Coast Guard had rescued a beached baby whale and delivered it to a marine animal rescue center. There were a few seconds of footage of the baby whale being lifted by helicopter in a net, and then some footage of it in the pool of the rescue center. That was it. I asked the people who found the whale to meet us at the beach. There we planned to do interviews and show scenes of the surrounding area sans whale.

While Tim George was setting up the camera, I kid you not, the wind blew onto the beach an inflated whale. Stunned, I quickly gathered everyone around and had the people re-enact what they did to help the whale. Though this inflated whale was quite large, it obviously wasn’t the size of a real baby whale. Tim had to find very creative angles to make it work. Meanwhile, the air was slowly leaking out of the whale! That unique footage was captured in record time. Unbelievable incident – and a heartwarming story. There were so many memorable moments including hunting gator on the bayou with an off-duty Coastie, miraculously passing helicopter crash training, and on a very long tour of the east coast, Paul Bihler reading us a book and dramatizing every voice because no books on tape (remember those?!) were available. And, somehow courageously saying no to a Discovery Channel deal – because it deserved a no. Fortunately, it all worked out in the end for Coast Guard: Rescue Swimmers. Thank you, Tam, Susan and all my dearest friends for the love, adventure and fond memories. Considering all the joy and excitement of the TV series, the best part and most dear to my heart are the people – ready to help in a moment’s notice, kind, creative, energetic and deeply committed to each other and the work. And fun! Everyone had a great sense of humor. I remember being called to officiate a formal procession and funeral of the office goldfish, offering the prayer as they flushed it down the toilet.

Each person has impacted my life in a unique, kind and loving way. Praying God’s blessings are lavished upon you all!