The “Six Million Dollar” Ride — Promoting something that doesn’t yet exist.

It was February of 2013. The Santa Cruz Beach Boardwalk was getting ready to open a new ride. Originally scheduled to open around Memorial Day, the challenge we were about to tackle was how to create a commercial that would air before the ride opened without being able to put people or even a camera on the ride. The creative team at Tam Communications was up to the challenge. As Creative Director, the primary responsibility for concept development fell squarely on my shoulders. We came up with five ideas and met with the Boardwalk’s Media Buyer, Austin Sherwood, to share our ideas and get his feedback. We narrowed it down to three fun yet very different concepts and then the Tam team went to work on storyboards for the big reveal. I wrote copy and created boards for two of the three ideas. Those ideas were live action-based so I could develop the boards using stock photos. The third idea, my personal favorite, required the services of our Art Director, Mike Baxter of Makai Design. I wrote the copy, Director/DP Tam O’Connor Fraser described the scenes he imagined, and then Mike started sketching. Once we were all satisfied, we mounted all three sets on boards and we were ready for the big meeting with the Boardwalk staff.

The Strategy of the Presentation

Maybe I’m giving away professional secrets here, but I typically like to present my favorite concept last and build to it. Of course, there is no guarantee that my favorite would be the client’s or even the rest of my team’s favorite. In fact, while the chosen concept was my favorite (yay!), there was a spirited debate with two votes for Concept Two—one vote from the Boardwalk and one from my team. In the end, the spot we called “The Six Million Dollar Ride” (because it was based on the Six Million Dollar Man television show’s opening title sequence not the cost of the ride), got the enthusiastic nod. So how could all three spots be done with the same budget? The first two spots depended on live action with a chunk of the budget going to a large cast. The winning concept needed budget for graphics and special effects so our cast, in this case, was the Boardwalk staff. Not only did it save $$$, it also made for a day of fun for those involved. We dressed the team in lab coats complete with Boardwalk logo patches and equipped everyone with safety glasses. Because television commercial making is so dangerous! Not. They looked like a serious team of scientists and engineers. We did our site survey and determined we could shoot the whole thing in three locations; two in the basement of one of the Boardwalk’s main buildings and one on the Undertow (formerly Hurricane) Deck. 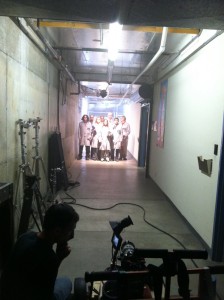 The first scene, which would take the longest (doesn’t it always?), involved the Boardwalk team walking around the corner and through the fog of a smoke machine. The basement hallway, which resembles the bowels of any government building seen in movies and television, was perfect!

Then we moved into Tech Services. These folks have all the cool toys and have some of the most fun on the Walk (IMHO), giving us a realistic-looking research setting that would be our backdrop for the next sequence of scenes–analyzing the dismantle of the Hurricane; swiping through ride specifications a la “Minority Report”; and reviewing a 3D hologram of the ride in action. None of these elements (monitors and projects) were actually there so our team had to pretend. What fun!

Our last scene of the day was outside after lunch, where the cast used an iPad to compare video of the ride in action (provided by the manufacturer from another park) to the half-constructed Undertow.

As usual, producers Regan Eymann for Tam Communications and Sondra Woods for the Boardwalk, made the day easy—great planning comes in handy—always important when a working set and a real work environment meet. Next up, post-production. Tam edited the first cut using his own voice (as we always do—we call it a “scratch track”) and we simultaneously put the script out for voice over auditions. With the first cut (no effects) approved by the client, it was then back to Mike, tasked to create the effects that were on his boards. We provided him with final renders of the background scenes and he was off and running. To create his magic, Mike brought in our 3D Partner (and also former staffer), Aaron Dingman, who would be charged with creating and animating the “hologram” of the ride with three cars spinning around the track. After all, the Undertow is Northern California’s only spinning coaster. It was cool to have the dynamic duo of Mike and Aaron together again.

The end result delighted everyone involved but never saw air until a year later because the ride didn’t open until October instead of May (another story and not ours to tell). Would we have taken a different creative approach if we could have waited and actually shot on the ride? Maybe. But it wouldn’t have been half as much fun to create.